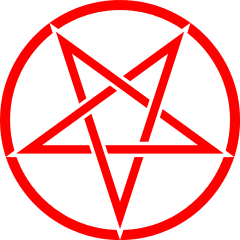 Welcome to the Satanic Liberation Homepage. This is not a church or a cult, or any other manner of religious institution. I am simply an individual with an interest in the practice of Satanic ritual and chaos magick as a means of self-liberation. I believe that the free development of the individual is the first condition of the free development of society as a whole. I reject dogmatism and fixed ideas, instead allowing my beliefs and practices to change according to what is most practical. To do otherwise would render any and all progress towards liberation null and void.

I view Satan as an egregore who has arisen from the collective consciousness of post-Christian society, and who represents the natural instinct within each individual towards radical subjectivity and self-management. I base this view on the 'romantic Satanism' of the 19th century - a broad literary trend in which Satan was employed as a symbol of rebellion and revolution against tradition and hegemony.

Unfortunately, in the mid-20th century, the figure of Satan was adopted by reactionaries, and has been reduced to a symbol of vulgar materialism at best, and mindless bigotry at worst. I reject the alienated and abstract 'individualism' espoused by these so-called 'Satanists', and embrace instead vital, radical individuality.

However the romantic, revolutionary image of Satan as an emancipator of humanity from the chains of oppressive hegemony, and from the entfremdung of modern life, deserves to be restored as a symbol of the liberation and free development of ALL.